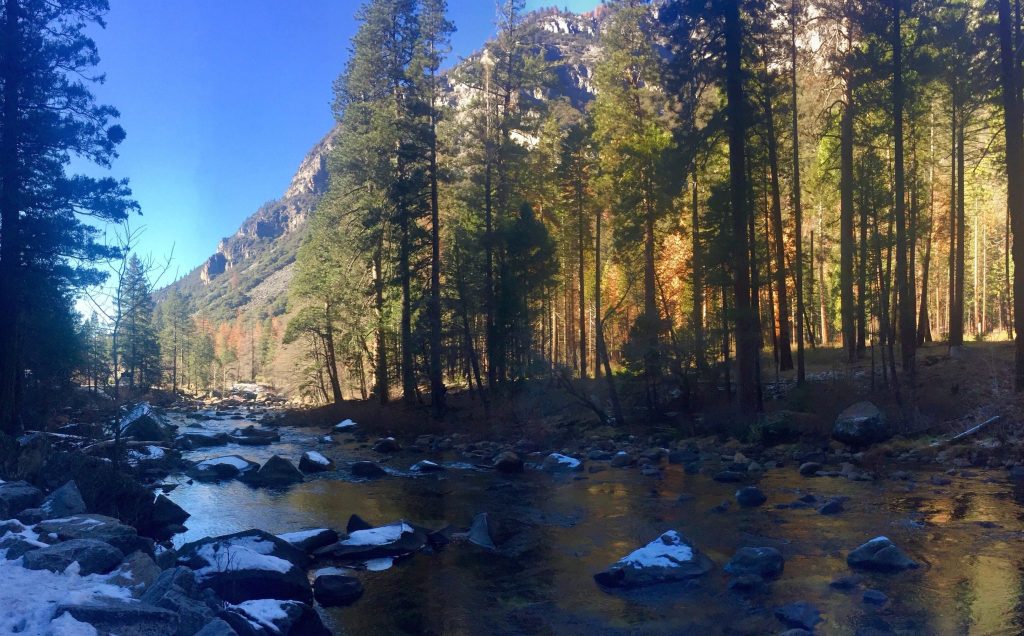 The astonishing beauty begins long before you enter the southern gates to Yosemite National Park.

As far as vacation spots go…I think that this heavenly place, is one where you will agree, is all about the drive and the destination.

Winding roads cut through sky-high pine trees that domino the landscape. Snow blankets the vast meadows and frosts the top of the monumental mountain range. The large, frozen lake glistens in the sunlight.  By comparison, it appears to be a puddle with the backdrop of skyscraping, boundless mountains and towering trees.  I was overwhelmed with gratitude to be in the presence of such beauty. I have traveled extensively and Yosemite National Park just might be the most glorious place in the world.

Yosemite National Park is spectacular in the summertime when wildflowers cover the ground. It is one of the most spectacular places in the world for hikers and photographers due to the extreme beauty. Visitors flock here year-round. Winter in Yosemite is absolutely surreal in its beauty.  It’s a frozen, natural, masterpiece.  Every time I visit, new discoveries are made. Just before Half Dome, is a sight, unlike anything most of us have seen.  Imagine driving down the road and seeing a wall of icicles cascading in a waterfall fashion. It looked like crystal daggers, flowing over black boulders.

On Hwy 41, just past Bridal Veil Falls, is a wooden, swing bridge over the river. Expect to be in awe, no matter which way you turn. It was the perfect viewing spot for many things.  My favorite was a waterfall in the distance that literally burst into a gorgeous rainbow of colors.

The meadows featured deer that are fearless and come so close that it can be unnerving. They are so docile and beautiful, that you have to be mindful not to let your guard down.

If you like beautiful rivers with water rushing over boulder’s and gorgeous, stone bridges, I recommend visiting the Majestic Yosemite Hotel. It was known as the

Ahwahnee Hotel, until March 1, 2016.   It is located in the main Yosemite Valley, close to the base of Half Dome and Glacier Point. Remarkably, you can view the Yosemite Falls, Half Dome and Glacier Point from this location. The view is worth the price of admission.  In 1927, it opened as the Ahwahnee Hotel and became a National Historic Landmark in 1987. This premier lodge is rustic, yet palatial with a Native American look.

The Ahwahnee was built in only one year.  Construction began on August 1, 1926, and was completed in July of 1927. This masterpiece of architecture is made of steel, stone, and wood with a granite facade and has massive glass windows with stained glass features.  The ceilings are stately, towering with enormous log beams. It is built for comfort and some areas have floor to ceiling plate glass to showcase the natural splendor.  Every viewpoint is spectacular inside and out of this luxurious resort. Two gigantic, stone hearths, cut from sandstone, have been blazing every time that I have been a guest.

It is easy to see why notable guests like Queen Elizabeth ll,

This hotel has so much history. Interiors of the Ahwahnee Hotel were adapted for Stanley Kubrick‘s horror film, The Shining (1980).  The film, The Canine Mutiny (1954) and Color of a Brisk and Leaping Day (1996) also include footage of the famous Ahwahnee hotel.

Prepare to become overwhelmed with heart-stirring emotion, by its majesty.